With the closing of the old Nuttelex factory in Windsor, shadows descended and dust settled. Old machinery remained, and trash in every shape and form took residence over time. The challenge for |notfair|’s co-curators in delivering this year’s exhibition hasn’t only been conceptual and logistical, but has also required a monumental physical effort to transform the space from derelict building to functional exhibition venue. 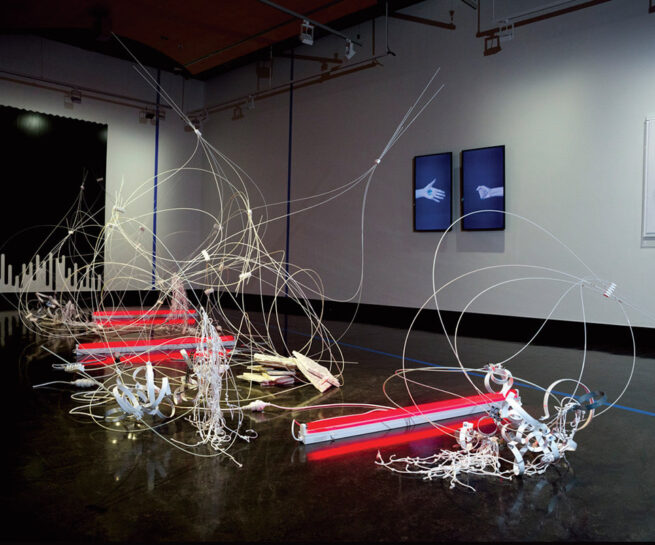 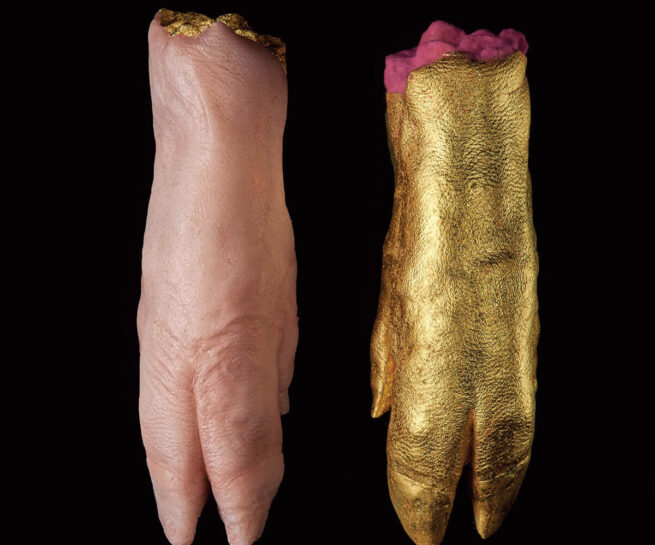 More Merry Pranksters than Micro-Managers, more socio-anarchists than social analysts, more bat-shit crazy than bureaucratic, the curators of |not|fair |2017 are not terribly good at following rules. All they ever really wanted to do was present some art by practitioners who very few people knew about. The work is for sale so it’s kinda an art fair, but it’s been carefully selected so it’s kinda a Biennale, but at the end of the day what it really is is a |not|fair, taking artists plucked straight from the studio without the filters of a commercial gallery or institutional approval.

While curatorial themes occur naturally, so do contrarian memes. Beauty and the grotesque settle side-by-side. Strange bedfellows, the only rules that the curators demanded from the artists were skill, imagination and devotion to their practice. Beyond that a degree of anarchy held the day.

Indeed, it was safe to say that the lunatics were taking over the asylum the day the curators first entered their new domain. It was, of all things, a former margarine factory that had been deserted for several years. One could not avoid the god-awful stench of putrefying vegetable fats left in the exposed bowels of the remaining machinery. That was before even registering the sheer havoc of detritus strewn throughout the spaces. It was as though a toxic alarm had engaged and the occupants had fled, leaving boots, clothing, hairnets and personal flotsam and jetsam behind as they ransacked the premises. It was even worse than the average artist’s studio. One early artist, a previous |not|fair| participant who prides himself on his own anarchistic principles, dubbed it impossible to use and that we were insane to even try. We deemed otherwise.

|Our hardy curators waded in, trying to follow some distorted notion of occupational health and safety procedures of their own making as they tossed machinery, rusting filing cabinets, steel pipes, clothes, arcane electronics, obscure tools and grease-covered metal shelves – a veritable cornucopia of junk – through mysterious holes cut through the 45-centimeter thick cement floors down into ominous-looking sump holes. There was, it had been previously verified, nothing deadly at hand, but the appearance down below was one of a stygian hell-hole which was promptly sealed away. The real danger, we were sure, could well be supplied by the artists once we’d found them.

The building made strange noises in the night. In short, it was a perfect venue for a |not|fair|.The networks to source the artists had been spawned seven years beforehand for the first iteration of |not|fair |– an intuitive linkage of artists, teachers, curators and writers criss-crossing the country. An alert, as it were, for an impending showing of emerging artists that didn’t necessarily depend on commercial galleries, curatorial rules or some form of payment for entry (another art fair held in 2017 charged artists exhibition fees of $1,895 – this model was anathema to |not|fair|). To be recommended by a fellow practitioner was the highest commendation for the curators.

A gross 1970s faux mahogany manager’s office stricken in a remote corner of the complex – thought to be useless by the curators due to its bureaucratic decor – was immediately seized upon by one of the first artists to visit, who planned to transform it into a bizarre alchemical laboratory. An adjoining 1950s brick cottage, long-used by the factory as a work-shed and utterly trashed, proved to be a goldmine to another artist, despite its pungent aroma of rotting carpet and mould. Once reeking freezer rooms bearing warning signs of every nature were readily converted into ideal video-screening sites.

A groaning particle accelerator hunkers down cheek by jowl with a steaming would-be incendiary device. On walls, plinths and screens sit severed and/or malformed body parts, demented landscapes, mythological figures, seeping toffee, bleeding fruit and/or taxidermied animals which were all grist to the mill. Morbidity is a perennial in any time and any locale, thus the memento mori is inevitably here, but so is humour aplenty. Depictions of nature are scattered about, but usually in a most unnatural way. Painting is not dead, but neither are video, drawing, sculpture, installation or photography. The artists, it seemed, had taken to the words of famed British occultist Aleister Crowley: “Do What Thou Wilt Shall Be The Whole of the Law.”

The adventure hoped for evolved into a safari of the surreal within the expansive confines of a building destined for demolition.

Two major prizes will be awarded as part of the 2017 | notfair | exhibition:

$10,000 non-acquisitive prize to be judged by Gareth Sansom, Anne Runhardt, and Ashley Crawford.

For paintings or works on paper, an exhibition  in 2018 with Hill Smith Gallery Adelaide  including freight costs and advertising.

To be judged by Sam Leach and Tony Lloyd.

The |notfair| Art Foundation Board and the exhibition’s curators have been generouslyassisted by the participating artists and a host of volunteers.

The Board and curators wish to pay tribute to all those artistsprofiled in this publication for their generosity, and also extend a special thanks [in no particular order and with apologies in advance to anyone we’ve forgotten!] to the following people:

We extend our sincere appreciation to our sponsors, without whom the 2017 |notfair| exhibition would not be possible, and invite you to support these community-minded organisations.